Recently a research paper on Toxic shock syndrome (TSS) and menstrual cup usage rocked our little cup universe and questioned our assumptions about the correlation of TSS with menstrual cup usage. Let us take a detailed look at the study and other associated material about TSS before hitting the panic button. 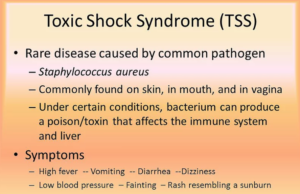 The following study was published in the American Society of Microbiology, May 2018. The abstract is as follows [1]:

Importance Menstrual toxic shock syndrome is a rare but severe disease. It occurs in healthy women vaginally colonized by Staphylococcus aureus producing toxic shock syndrome toxin 1 using intravaginal protection such as tampons or menstrual cups. Intravaginal protection induces TSS production by collecting catamenial products which act as a growth medium for S. aureus. Previous studies have evaluated the impact of tampon composition on S. aureus producing toxic shock syndrome toxin 1, but they are not recent and did not include menstrual cups. This study demonstrates that highly reproducible results for S. aureus growth and TSST-1 production can be obtained using a simple protocol that reproduces the physiological conditions of tampon and cup usage as closely as possible, providing recommendations for tampon or cup use to both manufacturers and consumers. Notably, our results do not show that menstrual cups are safer than tampons and suggest that they require similar precautions.

We reached out to one of the authors, for accessing the full paper. Unfortunately, it was a paid article and we could not download the full research paper. However, we managed to have an email conversation with the author and could get a few important clarifications.

Some known facts about TSS:

Our takeaways from the paper and other discussions and studies surrounding TSS.

Some precautions to be used with menstrual cup usage:

In conclusion, we believe that every period product (for that matter any product!) has upsides and downsides of usage. Menstrual cups offer women the promise of economical, trash-free, and comfortable periods. By far, the benefits far outweigh the risks. By following proper hygiene practices, menstrual cups can be as safe (if not safer) as any other menstrual hygiene management product.

Referring to the study with adolescent girls in Africa [6], this was the conclusion: “Among this feasibility sample, no evidence emerged to indicate menstrual cups are hazardous or cause health harms among rural Kenyan schoolgirls, but large-scale trials and post-marketing surveillance should continue to evaluate cup safety.”

So, can your menstrual cup cause TSS? Yes, it can, theoretically, but is much less likely than it scarily appears to be – With odds of one in a million, if you are a tampon user and perhaps, even less likely, if you use a cup.